It’s winter time and your weeds are probably suppressed.  But just like old Arnold, they’ll be back.  A weed can be defined as anything that’s growing where you don’t want it to grow, but a weed is also competition to whatever you’re trying to grow.  If you put your dog’s food out on the porch, the ants, rats, and crows are going to help themselves to that easy meal.  Growing pecan trees isn’t any different.  If you start to lime, fertilize, and irrigate the soil around your trees, every weed in the neighborhood is going to grow right there with it.  If you don’t keep the weeds in check, they will rob those trees of the nutrients and moisture around them in the soil.

Keeping weeds in check is especially important when the trees are young.  Young trees have a root zone about as big as a five gallon bucket.  If you allow grasses and weeds to grow in that zone, their roots will easily fill that space and outcompete the young tree.  That doesn’t always mean they will kill the tree, but more than likely, that tree will not thrive.

So how do you go about getting rid of these weeds?  If you’re a professional grower, you’re probably going to maintain what is known as an herbicide strip.  This is a row that runs along with your trees where pre and post emergent herbicides are applied and nothing is allowed to grow there.  This ensures those roots can take the full benefits from all the moisture and nutrients in the soil.  If you’re a hobby or home orchard owner, you probably don’t want that look in your yard because herbicide strips aren’t aesthetically pleasing.  Having a hobby or home orchard is as much about enjoying the beauty of the trees as it is about getting a good crop.

Silas Dudley, Bag-A-Nut’s President, has a hobby orchard in Georgia where he does research and development for the company.  He has dabbled in a few different approaches in his war against the weeds.  When he first planted his trees, he wanted to stick with an organic approach.  His first method was to use pine needles and pile them around the young pecan trees in hopes of smothering out the weeds.  It worked pretty well, but it was a lot of work to go out and rake up the pine needles and if he didn’t maintain a thick layer, the weeds would break through pretty quickly.

After he got tired of raking up the pine needles, he started to use cardboard from the Bag-A-Nut warehouse to smother the weeds.  The cardboard lasted a lot longer than the needles, but it didn’t take long before it started to look trashy.  This method also made fertilizing the trees difficult because the cardboard would keep the fertilizer on top of it and not allow it to go down into the soil.  “When I’d try to pick up the edges it would kind of crumble into mush and then I would get weeds coming up through there”, Silas explained.

After messing around with those techniques for a while, he eventually tried using weed cloth.  So far, that is his favorite technique for smothering out weeds.  It comes in a convenient roll you just have to cut into squares, make a slit up the middle, slide it around the tree, and stake down the corners.  One downside is the cost has now gone up to fight the weeds.  This also adds an extra step when fertilizing the trees because you have to remove the cloth, fertilize the tree, and then stake the cloth back down.  However, it is nice to not have to rake up pine needles or deal with cardboard scraps.

Silas continues and says “My organic approach to weed control has been to smother them out.  But there are organic chemicals that you can spray on weeds to kill them.  My impression of them is that you have to use them quite often because they don’t actually kill the root of the weed, they just burn off the part of the weed they come into contact with.”  He says that’s not much different than mowing or hacking them with a weed eater, so he hasn’t been inclined to try them.  He recently heard of a company called EcoMight that has an organic herbicide that is systemic.  This means it will kill the root of the weed just like a synthetic glyphosate based herbicide, so you should get a long lasting kill from an organic herbicide.

His nonorganic approach to weed control has been to spray a glyphosate based weed killer from a backpack sprayer onto the weeds in his orchard.  He’s pleased with this technique because it’s way less labor intensive than the smother techniques and when he’s done it produces a clean area around the tree, making it easy to mow and fertilize.  He warns that you have to be very careful with the glyphosate because if you accidently spray it on the young trees, they will probably die.

The war against weeds is an ongoing battle.  Do your own research, decide which method you want to use to fight against them, make a plan, and get out there and enjoy your orchard.  To learn more about home and hobby orchards, check out all our other videos on Bag-A-Nut’s YouTube channel.  Make sure to look at the Nut Dynasty playlist linked here: Nut Dynasty – YouTube

How To Plant Pecan Trees

Out of all the things that are involved in establishing an orchard, planting the pecan… END_OF_DOCUMENT_TOKEN_TO_BE_REPLACED 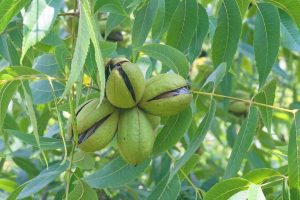 The days are getting shorter, there’s a cool breeze in the air, and if you… END_OF_DOCUMENT_TOKEN_TO_BE_REPLACED 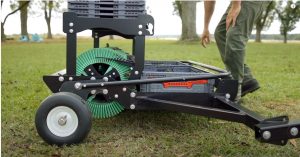